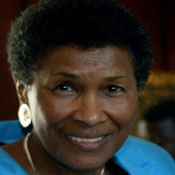 Gloria Wade Gayles, Ph.D., earned a B.A. in English from LeMoyne College, an M.A. in American Literature from Boston University (as a Woodrow Wilson Fellow), and a Ph.D. in American Studies from Emory University. She was awarded an Honorary Doctor of Humane Letters from Meadville-Lombard Theological School of the University of Chicago and named the CASE Professor of Teaching Excellence for the State of Georgia.

A recipient of the Emory Medal for outstanding scholarship and service of an alumna of Emory University, she has been a DuBois Fellow at Harvard University and Eminent Scholar’s Chair at Dillard University. Other awards include the Spelman College President’s Award for Outstanding Scholarship, the LeMoyne-Owen DuBois Scholar’s Award, and the Malcolm X Award for Community Service in the City of Atlanta for work as an activist in the Civil Rights Movement continued work for justice.

Her publications include numerous articles in national journals and six books, among them Pushed Back to Strength: A Black Woman’s Journey Home; No Crystal Stair: Race and Sex in Black Women’s Novels, and “My Soul Is a Witness”: African American Women’s Spirituality . Her most recent publications are In Praise of Teachers (Beacon Press, May 2003), and Conversations With Gwendolyn Brooks University Press of Mississippi, December 2003).

Recently she conducted research on a critical study of the community as savior in selected African-American novels. In August 2000, she was named Eminent Scholar’s Chair in Independent Scholarship and Service Learning at Spelman College. In addition to being the faculty mentor for Spelman's Independent Scholars program, she is founding director of the SIS Oral History Project and RESONANCE, a choral performance group at Spelman College.