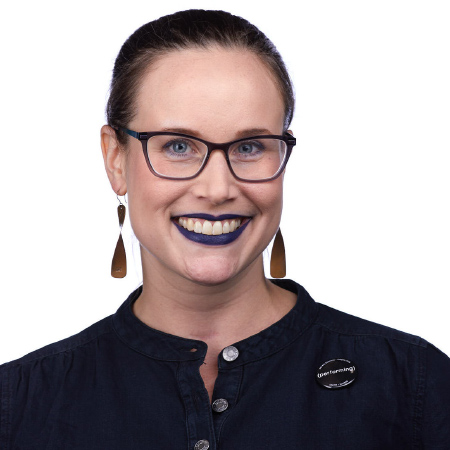 Katie Schaag, Ph.D., is excited to join Spelman College as an assistant professor of theatre & performance. Her interdisciplinary approach to contemporary performance engages the page, stage, gallery, screen and social context as sites of embodied inquiry. As a writer, artist and theorist, she researches experimental aesthetics through the lenses of critical race, gender, feminist, trans, queer, and environmental studies. At Spelman, she’s looking forward to teaching performance theory and practice, digital storytelling, writing for performance and other courses at the intersection of theatre, art, literature and digital media.

From 2018-2021, Dr. Schaag has been a Brittain Postdoctoral Fellow in the School of Literature, Media, and Communication at Georgia Tech, where she has taught multimedia communication courses, served on Institute Diversity’s Transformative Narratives steering committee, and collaborated with the Center for Serve-Learn-Sustain. She came to Georgia Tech from the University of Wisconsin-Madison, where she was the Mendota Postdoctoral Teaching Fellow after earning her Ph.D. in English literature with a specialization in performance studies and a minor in fine art and creative writing.

Exploring the performative production of identity in everyday life, in her artistic practice she creates site-specific performances, immersive multimedia installations, lecture performances and participatory experiences. With her artistic duo SALYER + SCHAAG, she orchestrates durational relational aesthetics projects. She has performed and exhibited her solo and collaborative artwork in museums and galleries including Madison Museum of Contemporary Art, Woman Made Gallery, La Fonderie Darling, Art + Literature Laboratory, and Chazen Museum of Art.

As a creative writer, she makes hybrid work at the interstices of poetry, drama, and digital media. Her poetic scripts and conceptual scores have been published in Imagined Theatres, Datableed, La Vague and elsewhere; and her plays have been staged at Hemsley Theatre. She is the author of the feminist erasure poetry chapbook "The Infinite Woman" (Greying Ghost 2021) and the interactive remix/erasure poetry web app The Infinite Woman (Angular 2019), selected for inclusion in the Electronic Literature Organization’s global e-lit collection (vol. 4). She is currently at work on a book of experimental scripts entitled “The Moon Appears Upon the Stage and Other Conceptual Plays.”

She is committed to public arts and humanities programming, and was selected as a Humanities Without Walls National Fellow. At UW-Madison she co-founded the Art + Scholarship Borghesi-Mellon Workshop and the Madison Performance Philosophy Collective, and co-curated a series of grant-funded “Theory-Practice Collaboratories” and international symposia. She looks forward to contributing to interdisciplinary arts programming at Spelman.

“From Bush to Brontë and Back Again: The Most Wuthering Heights Day Ever.” Yes Femmes Issue 2. Los Angeles, CA, July 2018. Web.

The Most Wuthering Heights Day Ever. Site-specific participatory performance in Madison, WI (2016 and 2017) and Belgrade, Serbia (2018). Featured in Isthmus, The Capital Times, Tone, and WORT 89.9FM.