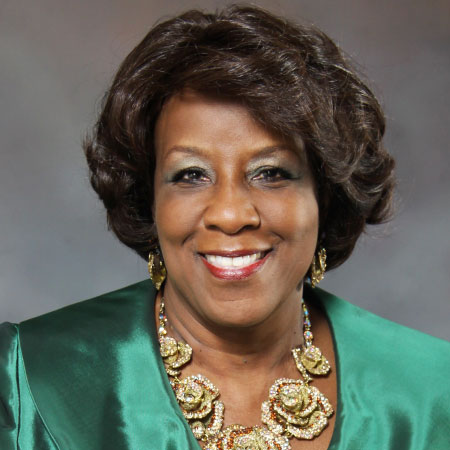 A native of Atlanta, Georgia, Laura English-Robinson received her B.A. degree from Spelman College and the M.M. degree from the College-Conservatory of Music at the University of Cincinnati. She was a scholarship recipient and vocal fellow at the Berkshire Music Center (Tanglewood), the Brevard Music Center, the Mozarteum in Salzburg and the AIMS summer study program in Graz, Austria. She has toured France, Spain, Italy, the United States, and South America performing in chamber, solo, orchestra and opera performances. She was also the winner of Italy’s Golden Puccini Vocal Competition and recipient of the Sullivan Foundation Awards, Mayor’s Fellowship in the Arts (City of Atlanta) and the Martin Luther King, Jr. Artistic Achievement Award.

English-Robinson has performed on numerous occasions with the Atlanta Symphony Orchestra under the batons of Robert Shaw, Yoel Levi and Robert Spano. She made her New York debut at Lincoln Center’s Avery Fisher Hall and later returned for performances at Alice Tully Hall. She has performed in recitals throughout the United States, at the National Cathedral in Washington, D.C., Spivey Hall in Atlanta, Piccolo Festival in Charleston, SC, and as soloist with the Chattanooga, National Symphony, Montgomery, Lexington, Dekalb, and Albany Symphonies and Orchestra Atlanta. Equally at home with opera as with recitals, oratorio, and chamber music, she has performed operatic roles from standard to contemporary operas, including the title role in the world premiere of the opera "Zabette" by composer Curtis Bryant and librettist Mary Bullard. English-Robinson completed a six-week summer performance tour of "Porgy and Bess" in Paris (France), Granada (Spain), Caen (Normandy) and Luxembourg with The Atlanta Opera.

English-Robinson currently serves as adjunct voice instructor at Spelman College. She is a member of Pi Kappa Lambda Music Honor Society, The National Association of Teachers of Singing, Delta Omicron Music Fraternity, National Coordinator of Collegiate Young Artists Concerts for the National Association of Negro Musicians, an alumna of the Buckhead/Cascade City Chapter of the Links, Inc. and Founder/Director of the Singing Sisters. She can be heard on three solo recordings: Let It Shine!, a recording of traditional and contemporary settings of Negro spirituals, Great Day!, and Christmas Chestnuts.

“Her vocal quality is thrillingly warm and vibrant…her singing is filled with nuance and color… her sense of rhythm keen. Her stage presence is vividly communicative…”
Derrick Henry – Atlanta Journal Constitution