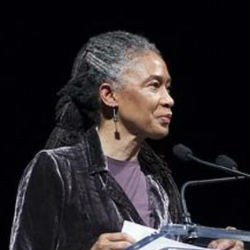 Professor Sharan Strange has been honing her craft, publishing her work of art, and delighting audiences with her creative prowess for decades. While she is often quite busy teaching creative writing at Spelman, serving as a community board member of Poetry Atlanta, and coordinating the annual Decatur Book Festival, she always finds time to write, to create and to think. Always.


This summer, two of her works premiered in concert performances in New York City. Her poem "Childhood" was set to music as part of the song-cycle, "Summer Songs," composed by Robert Paterson, and premiered by the American Modern Ensemble on May 26. "Yet Unheard," her commissioned collaboration with composer Courtney Bryan, was the featured new work at "Sing Her Name," a concert honoring Sandra Bland and social justice movement for Black women's lives, and performed by The Dream Unfinished Orchestra on July 13 at The Great Hall at Cooper Union. She was also selected to serve a five-year term as Elector for The Poets Corner of The Cathedral of St. John the Divine in New York.
A prolific writer, Strange is the author of the full-length collection "Ash" (Beacon Press, 2001), which was selected by Sonia Sanchez for the Barnard Women Poets Prize. She is also a founding member of the Dark Room Collective; and she served as co-curator of its Dark Room Reading Series, which presented over 100 established and emerging writers, musicians, and visual artists of color to audiences in the Boston area from 1988 to 1994.

Her work has appeared in journals in the U.S. and abroad, including Callaloo, the journal of African diaspora arts and letters (where she served as a contributing editor for many years); the American Poetry Review, and Agenda, a South African publication. Her writings have also been featured in The Dream Unfinished concert series #SingHerName, and in exhibitions at the Whitney Museum, the Skylight Gallery in New York, and the Institute of Contemporary Art in Boston. Her commissioned piece, “Everyone Is a Mirror,” was featured in the catalogue for the exhibition "Black President: The Art and Legacy of Fela Anikulapo Kuti" at the New Museum of Contemporary Art in New York.

Strange’s honors include the Rona Jaffe Foundation Writer’s Award, an Artist Award from the D.C. Commission on the Arts, Pushcart Prize nominations, and residencies at the Gell Writers’ Center, the MacDowell Colony, and Yaddo. This year, she presented at the symposium, "Lineage: From the Black Arts Movement to Cave Canem," as part of the panel on "Organizing Founders," at the Library of Congress in Washington, D.C. in June.